Every now and then, it is a good idea for us all to stop and take stock.

We should look back objectively at what we have done so far and regain the strength to start over with even more enthusiasm than before.

In addition to wooden houses, we have been constructing public buildings for years.

These are complex projects that require a much greater organisational ability, due not only to the complexity of the project, but also to the endless number of details to be monitored.

In the public building sector, the realisation has finally dawned that materials like wood guarantee high-performance buildings in terms of energy-saving (or even virtually zero consumption) and a considerable level of seismic safety.

It is pointless to emphasise (but sometimes important to remember) that the seismic risk in Italy is anything but sporadic.

Taking stock, as we said. This has been a fairly busy summer for us. The Covid emergency caused a major slowdown work, but the efforts of our work team and collaborators allowed us to achieve the objective of delivering a full five wooden structures, four of which had to be ready for use at the start of the school year. This inevitably led us to concentrate all the work in around five months.

A particularly emotional and exciting moment was the inauguration of the Music Academy in Camerino (MC), named after "Franco Corelli" and donated by the Andrea Bocelli Foundation.

The renowned tenor, together with many friends and colleagues, celebrated the event with music and once again (not forgetting the schools of Sarnano and Muccia ) planted a seed of hope in our territory, after the devastation caused by the earthquake in 2016. 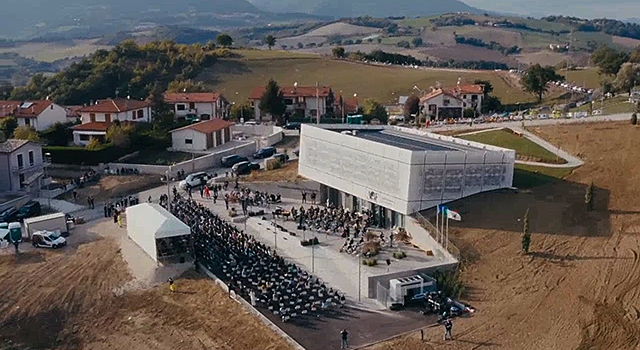 Another event unfortunately associated with the earthquake, and with a highly symbolic value, was inauguration of the "Giulio Beccia” nursery school and the  "Crescenzio Taranta” primary school in the Arischia district, in the province of L'Aquila.

This was the first school to be completely rebuilt after the earthquake in L’Aquila in 2009. 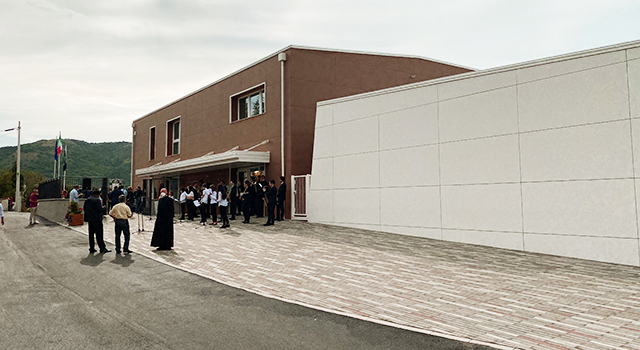 Then there was the school in Adro (BS), a major project in a public-private sector partnership between our company, the Brescia-based company Buratti Impianti and Ubi Leasing. This type of collaboration is becoming increasingly frequent in Italy, particularly in the sustainable building area of the public works sector.

The recently inaugurated Montecalvo Nursery School in Foglia (PU) also has a structural element with a strong symbolic value.  One pillar has been transformed into a tree of life, giving it a meaning that goes beyond its strictly technical use. 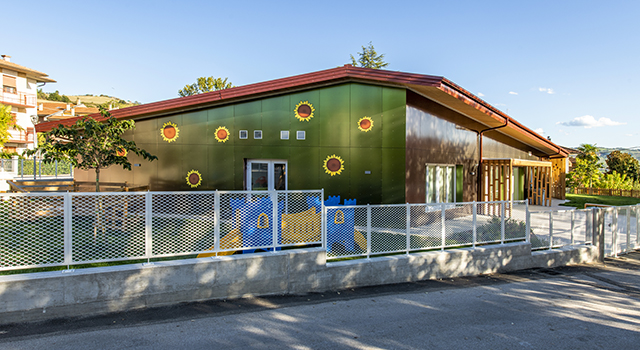 If we are talking about schools, mention must also be made of the  "Montessori" School in Rimini, named after the celebrated educator and pedagogue.

Inauguration of the "Montessori" school was a sober and rapid event, due to the current health restrictions, but was highly emotional and deeply felt just the same.

As well as being anti-seismic, the school is a nearly zero energy building, meaning it has very low consumption. There will be no gas heating and the school will run entirely on electricity, with solar panels. 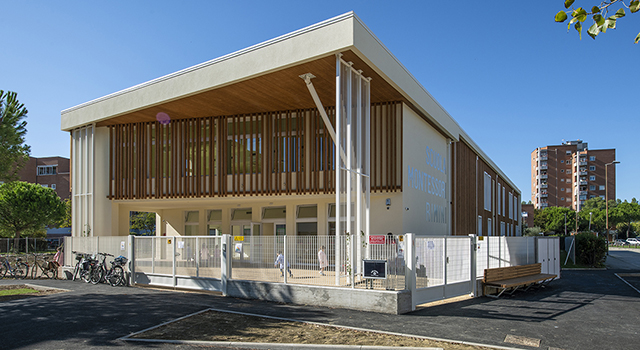 Other construction sites have started up in the meantime.